Over the course of this blog post, the following steps will be demonstrated in order to configure private site access for an Azure Function:

The following diagram shows the high-level architecture of the solution to be created: 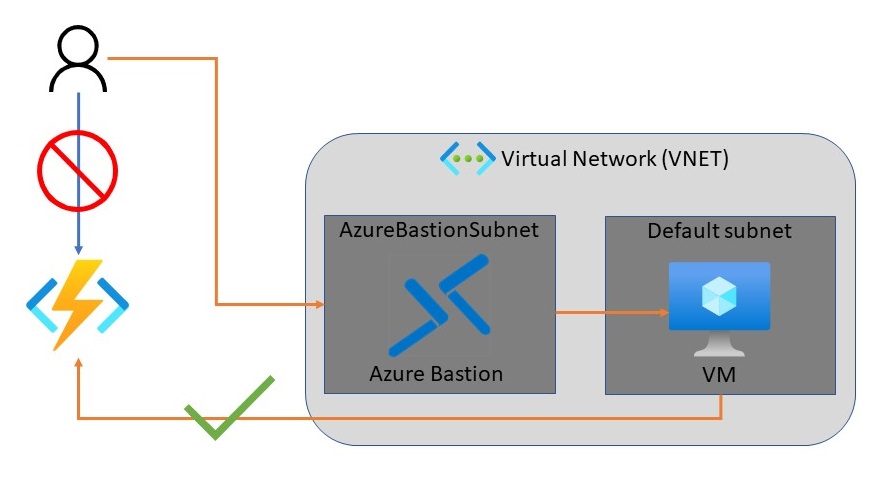 Next, create a new Windows Server 2019 Datacenter virtual machine via the Azure Portal. Microsoft provides a quickstart on creating a VM which outlines the basic steps for creating a VM. Below are a few additional details related to virtual network configuration, which isn't shown in the quickstart documentation.

Note – I’m using a Windows VM in this blog post, but a Linux VM could be used too. I’m just more familiar with Windows.

Azure Bastion is a fully-managed Azure service which provides secure RDP and SSH access to virtual machines directly from the Azure Portal. For the purposes of this blog post, using the Azure Bastion service removes the need to configure a VM, and related virtual network settings, for RDP access. It’s generally frowned upon to put a VM on the internet with a publicly discoverable RDP port. In fact, many organizations strictly prohibit doing so. 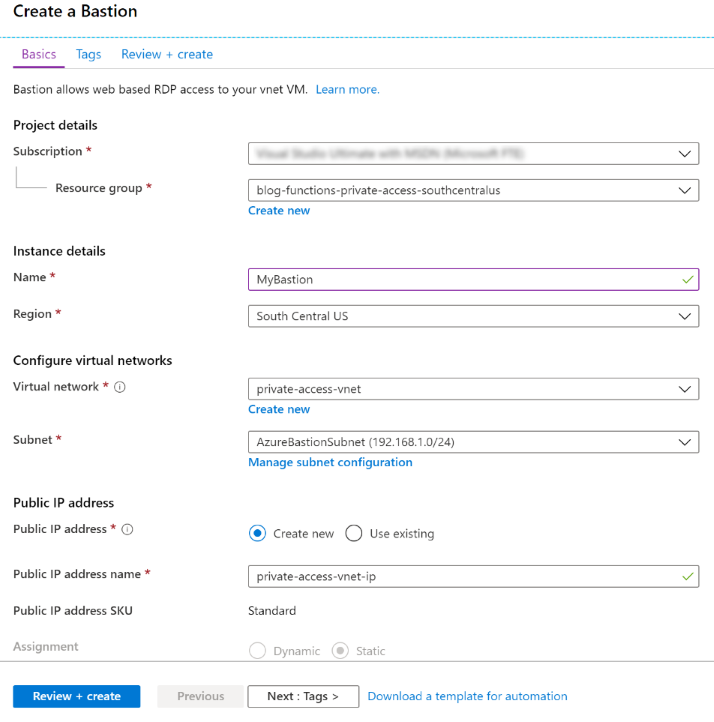 With the virtual network in place, the next step is to create an Azure Function App using a Consumption plan. The function code will be deployed to the Function App a bit later in this post.

Step-by-step details for creating the function app is detailed in official Microsoft documentation, so I’ll not repeat it all here. To summarize, the following is being created:

Below is screenshot of the configuration settings used. 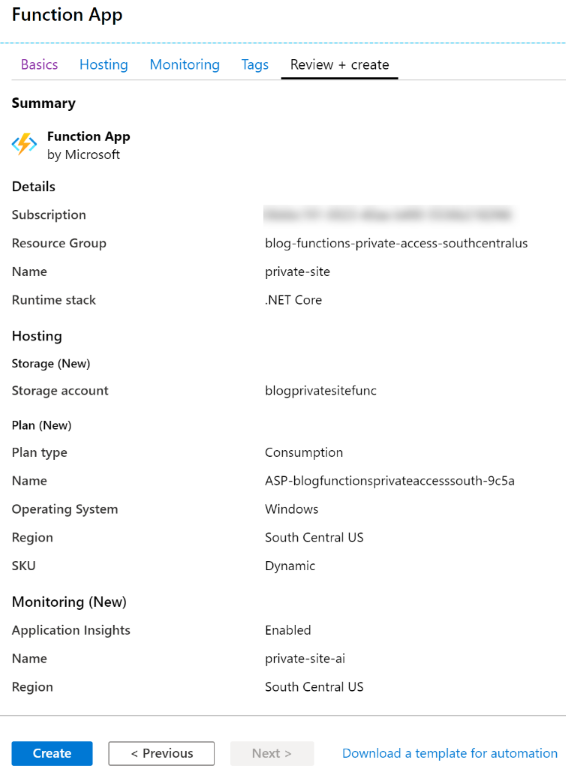 With the function app in place, the next step is to configure access restrictions to ensure only resources on the virtual network can invoke the function.

Within the function app, proceed to the Platform features tab. Note that in the screenshot below, while there is a function app, there are no functions. 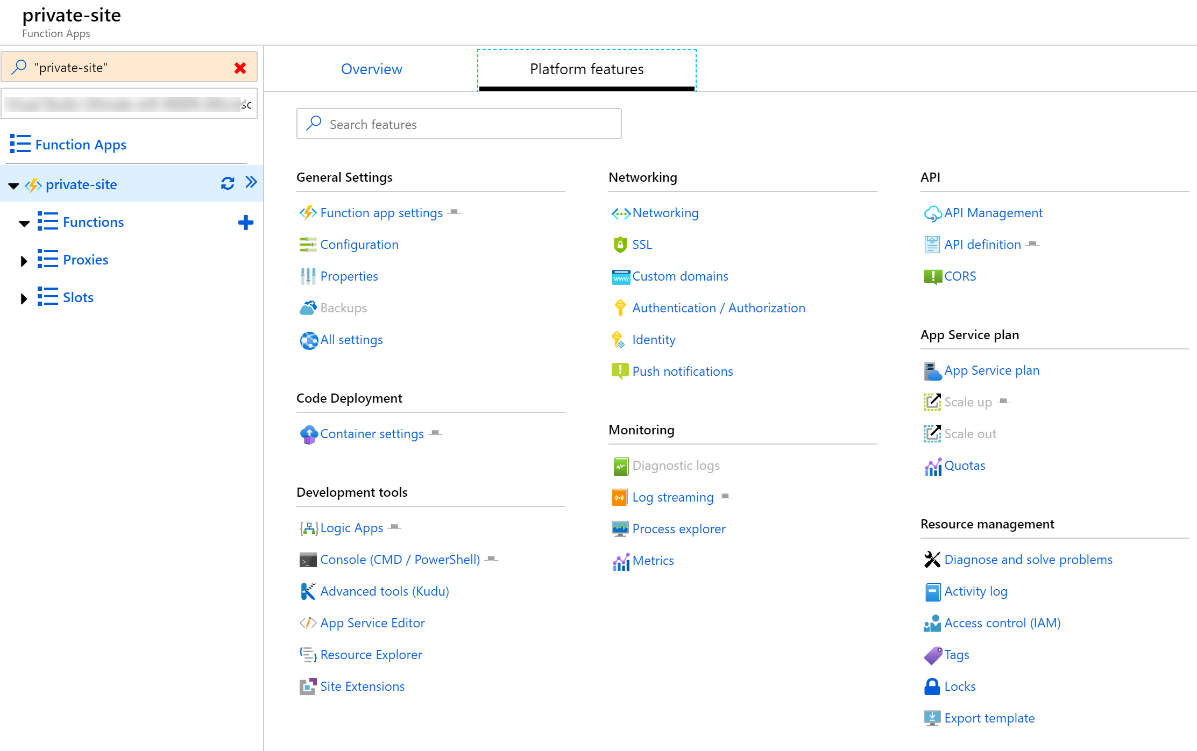 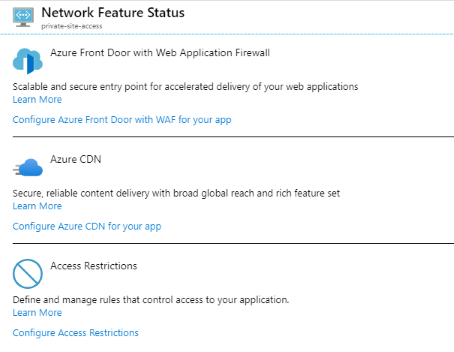 It can be seen on the Access Restrictions page that there are no restrictions in place. Well, there is a default which is to allow everything. For private site access, a new access restriction configuration needs to be created. Do so by first clicking on Add rule.

This will open new Add Access Restriction blade on the right side of the portal. The key configuration in this blade is to select Virtual Network from the Type drop-down selection box. Once Virtual Network is selected, select the desired virtual network and subnet. 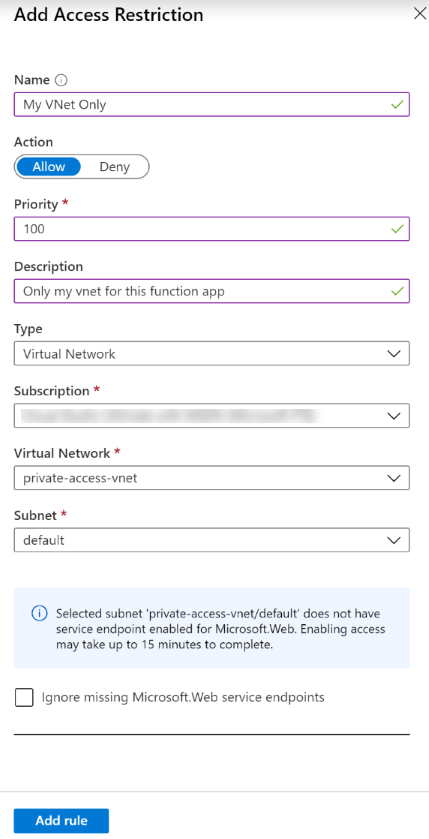 The Access Restrictions page now shows that there is a new restriction. It may take a few seconds for the Endpoint status to change from Provisioning to Enabled.

It is important to note that access restrictions have not been enabled on the SCM site, private-site.scm.azurewebsites.net. By not enabling access restrictions the SCM site, it will be possible to deploy the Azure Function code from a local developer workstation or another build service without needing to take extra steps to provision an agent within the virtual network.

Once the access restriction is in place, you will notice a warning at the top of the Azure Function app page - "Access restrictions have been added to your function app. This may affect your ability to manage it from the portal and make the runtime unreachable." At first this may be a little worrisome, but it makes sense. A rule has been created which indicates the function(s) should not be accessible from the public internet, but only the designated virtual network.

If you try to access the function app now, you should receive an HTTP 403 page indicating that the app is stopped. The app isn't really stopped. The response is actually a HTTP 403.6 - IP address rejected status. That makes sense, as the site is being accessed from outside the specified virtual network. 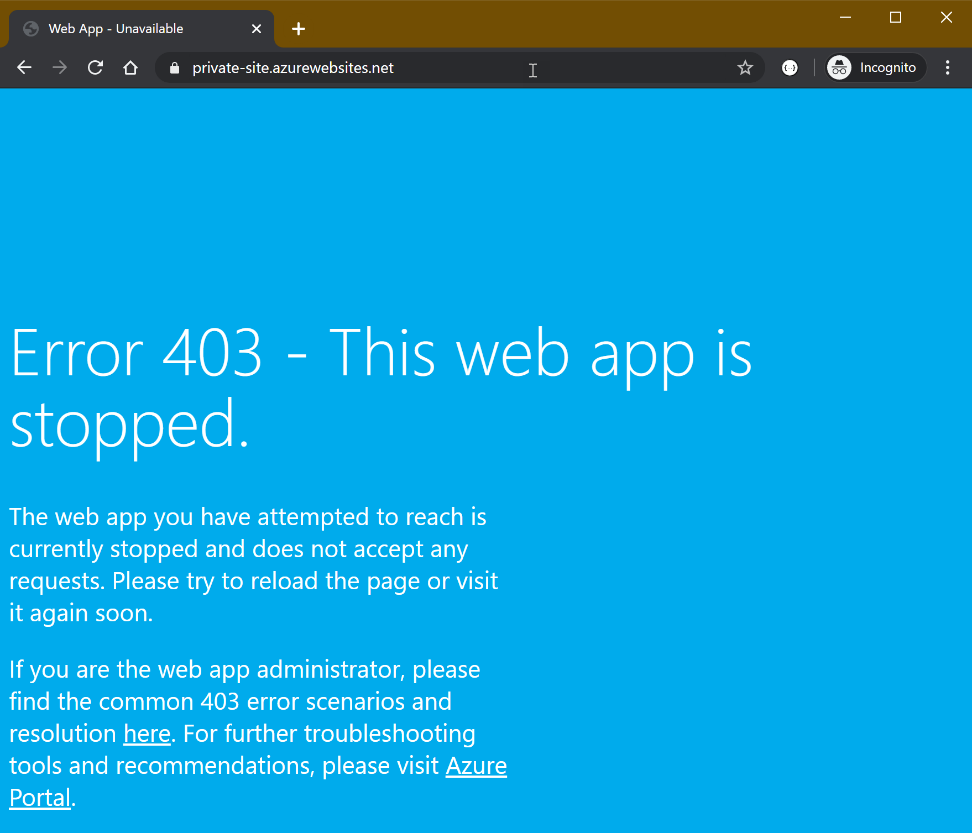 In order to access the site from the VM which was previously configured in the virtual network, connect to the VM via the Azure Bastion service.

From the web browser on the VM it is possible to access the site.

From the VM on the virtual network it is possible to access the default Azure Function site. The next step is to create an Azure Function and deploy it.

It’s important to note that while the function app is only accessible from within the designated virtual network, a public DNS entry remains. As shown above, attempting to access the site will result in a HTTP 403 response.

For the purposes of this blog post, a basic Azure Function is created by following the steps Microsoft provides for a quickstart to create a C# function. The quickstart tutorial creates a C# HTTP-triggered Azure Function. This results in an Azure Function that is accessed via a URL such as https://private-site.azurewebsites.net/api/Function1. Invoking the function via an HTTP GET or POST should result in a response of “Hello, {name}”.

There are four basic steps in the quickstart tutorial for creating an Azure Function:

When publishing the function, select the Azure Function Consumption plan previously created. For this blog post, the Azure Function is deployed from my development laptop which is not connected to the virtual network used in this post. It is possible to do this because access restrictions where not configured for the SCM endpoint. 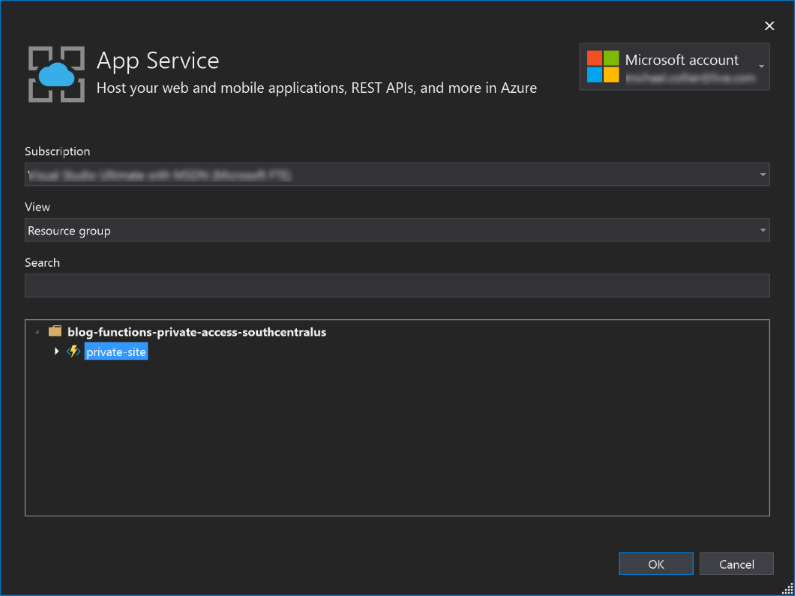 In order to test access to the function, copy the function URL and try to invoke it from a web browser. Doing so from a local machine will result in a 403 web app is stopped message. 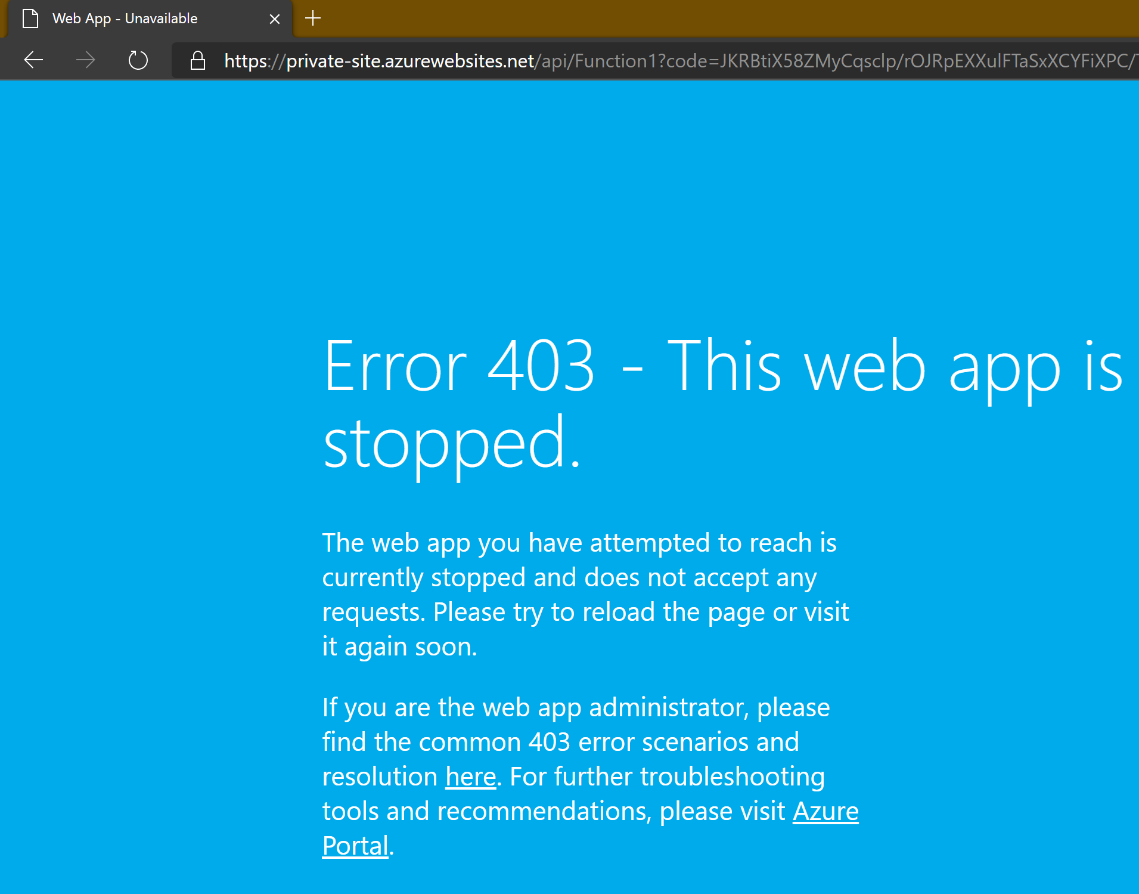 However, accessing the function via a web browser (by using the Azure Bastion service) on the configured VM on the virtual network results in success!!

Thanks to Thiago Almeida and Alex Karcher for their assistance in reviewing this blog post.